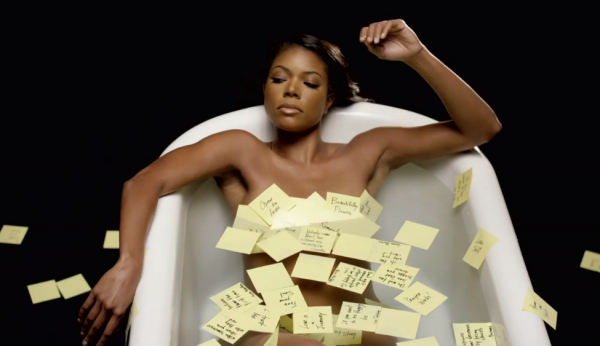 Gabrielle Union is gorgeous. I think most people would agree, including her husband, NBA star and soon to be hall-of-famer Dwayne Wade. The Being Mary Jane star has been in plenty of films like Bad Boys II, Deliver Us From Eva and Think Like a Man, just to name a few. It seems Hollywood has always been impressed with her skills and beauty, but it may come as a surprise to many that Union struggled with self-esteem issues as a child and young adult.

Never one to shy away from speaking out about colorism, Union, 43, has talked about her early struggles and her journey to getting to a place of self love. In a letter to her younger self featured in EBONY, she wrote:

“Your deep mahogany skin may not resemble that of the others in your family, but it’s just as gorgeous and you’re just as worthy… One day you’ll appreciate how much your brown skin shines in the moonlight, glistens in the sun and ages ever so slowly. Don’t let that pesky low self-esteem creep in and fool you into believing that you don’t have value…don’t allow it to crush your will or dampen your spirit…”

It’s hard to even fathom there was ever a time when she didn’t see herself in all her beauty and worth, but in an open letter to the public titled, “Things You Generally Don’t Share,” she admitted what had kept her from seeing herself in the same light that the world sees her in.

A self-proclaimed “perfect child” in her parents eyes, Gabrielle Union appeared to do everything right. She was a great student, a versatile athlete, an inspirational student leader and she never got in trouble. But how she felt inside reflected the opposite. What she did was a lot of self-loathing. “What I was dealing with individually and as a group of girls, was absolute turmoil. Emotionally, physically, spiritually, we were forced to deal with a lot of adult issues and situations as a collective, and often times we wouldn’t turn to each other, we would internalize everything, we didn’t have an outlet. So, I was going through MAJOR low self esteem.”

But what kind of issues and where did they come from? She wrote, “I was a black girl in an all white school in an all white community, never feeling good enough, but always being encouraged by my parents to be bigger, badder and better. And perfect is the standard. That’s an immense amount of pressure to put on a child.”
Union grew up in Omaha, Nebraska with the perspective that blonde women were the “ideal of beauty” and “if I looked nothing like that, then I must be ugly.” Children go through a lot. They have yet to really figure out who they are. In addition to that, they deal with harsh judgement from other kids. Though never mentioning any specific circumstances of tough judgement, she recalled, “I was never really looked upon as being pretty. Every girl wants to hear, ‘You’re a princess,’ and people would be like, ‘You are funny.’ or ‘What a smart girl Gab is!’ I was like, ‘I don’t want to be smart! I want to be pretty!”

This was soon followed by what some remember as a joyous time in life, but for Union it wasn’t: She began liking boys. Here was the problem: “And in my own town, with me being THE black girl, the white guys weren’t really checking for me in that way. When I got to go to basketball camp and I got be around black boys, I was like cool…until I got dumped…for a light skinned girl.” Union continued, “And then that whole thing started. My hair isn’t straight enough. My nose isn’t pointy enough. My lips are too big. My boobs aren’t big enough. And you start going through all of that. And I realize as I’ve gotten older a lot of issues that I was dealing with at 15, I am still dealing with today.”

We have all heard the phrase “Hollywood is Hell.” What people are referring to is how Hollywood can “swallow” a wholesome individual and spit them back out. When Hollywood is done with them, they can be reduced to less of what they are. The loss that these people feel is because their self-confidence has been taken away. As a famous actress, Union admits, “In the business that I am in now, it is incredibly tough, and to be honest, sometimes it is hard to keep my head above the water, sometimes I feel like I’m drowning.”
So how does Union, who has suffered from self-loathing for so long, deal with it?

I’m just really fortunate to have people [and] friends I can call on at any hour. You don’t get a job, and you immediately want to blame it on, if my hair was different, or maybe if my nose…or they just want to go with light-skin girls, and you start to doubt yourself, and the self-doubts and the low self-esteem starts to creep in. When that happens I know that I can call on a good friend. One day, he made me do this exercise, which I thought was ridiculous at first, standing in the mirror and finding things about my face that I loved, whether it be the freckles or my eyebrows, and just concentrating on all of the positive things…and I thought it was a load…and then, I found myself doing it one day and I found myself feeling a little bit better. So I texted him and I was like, ‘it worked’.” What I found is that it’s great that I have a group of girlfriends that I can rely on, but it can’t just be this one-way street of women validating women.”

Union explained, “There’s something about a platonic, non-sexual male voice in your life, ideally your parent, your father, relative or brother, which should be a steady, consistent source of nothing but positivity. And having this friend inspired me to reach out to my own dad and tell him that he’s got to tell my niece every day that she is a beautiful princess. I can tell her that she has a lovely jump shot, or she does well in school, but what she’s gonna’ start looking out for from other people, from other men, is to tell her how beautiful she is, and she’s gonna’ find validation in all the wrong ways. So, it is important to be that mentor, to be that guiding figure in her life, so she doesn’t accept validation from the wrong places.”

These all may be things “you generally don’t share,” but we’re so glad that she did.